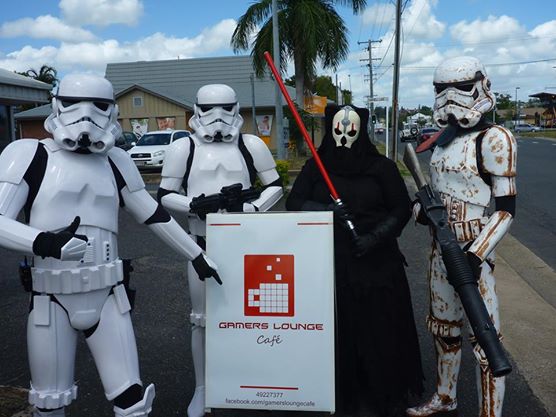 Just following up on an event I went to recently but I will give you the run down first.

You may have noticed from a previous post of mine that I attended a Mortal Kombat II tournament. Yes that’s right. I didn’t know what to expect as my home town Rockhampton seems to have a problem with going out to things and supporting local businesses let alone local events.

So rather recently a new business opened in town called “The Gamers Lounge”. I first heard about them after seeing a friend of mine post on their page which appeared on my Facebook news feed. I went to their Facebook page to check them out and they were just starting, working towards an opening day, gathering awareness. I was amazed and surprised to see that someone has taken the bulls by the horn and was looking to open a place like this in Rockhampton. I’ve been waiting for something like this for years.

I know it sounds like I’m bagging Rockhampton out, the thing is, well, it’s more of a country and trade town. For the vast majority of you in the world who have no idea what a “Rockhampton” is it’s: The beef capital of Australia. There isn’t a lot of culture here or niche markets available for the youth populous and you really need to make your own fun here as there is really nothing to do here. There’s the shopping centre, a cinema and a skate park and that’s about it. Non existent music scene now days and most of the events the council would support or fund have ceased. It’s now basically a retail town. There’s pretty much nothing here that the kids are enjoying in the bigger cities so we are all used to staying at home and entertaining ourselves or going nuts from restlessness. Why do I still live here you might ask? Good question. Pretty much family, friends and the quiet laid back lifestyle keeps me here and that’s it. I also don’t get out much the last couple years or get to catch up with friends as much as I used to or would like to, but that’s growing up for you.

Now back to The Gamers Lounge. You might now have a better understanding why I am excited and amazed a place like this now exists in Rockhampton. I followed their updates and progress online all the way to their opening event dates which I couldn’t make unfortunately due to unforeseen circumstances but I saw their feed back on their page and was happy to see all positive comments and they had a great turn out.

Apparently the Empire approves of this movement.

Soon after I saw they posted something about a Mortal Kombat II tournament they were holding one lazy afternoon and I immediately put my hand up. I rallied some of my friends together and we all would head down, this would all be our first visit as well. I put on my best Power Rangers shirt, my Gears of War cap, COG tags, took my Superman iPhone case to boot and made my way down there all a buzz.

Once I finally managed to navigate to their location, I am hopeless with a GPS by the way, I circled the block like 4 times wondering why I’m parked next to the marker but the shop is no where to be found as I’ve ended up in an open lot. I took a moment to console myself and realised I had input their address incorrectly. Gladly knowing I can blame my phone for leading me astray, I eventually arrived at my intended location.

Upon my arrival I found I was pleasantly surprised. One look around the room brought back massive nostalgia sensations throughout my bod. I saw a N64, NES, SNES, Xbox, MegaDrive (Genesis), Gamecube, Virtual Boy, PS2, Gameboy just to name a few. I’m pretty sure I even saw a Jaguar. Needless to say I’m smiling at this point. Then I noticed a sizeable Cafe counter and a big flash Coffee machine, menus, snacks and more. As I passed on lunch I hastily greeted the gentlemen (Desmond and Craig) running the establishment and checked their menu. My normal Caramel Latte wasn’t on their menu so I challenged them to make me one. They succeeded, I then ordered two cookies to suffice my gullet. I would then take a seat in satisfaction and began consuming my delectable goods whilst conversing with my fellow comrades.

A pre-opening day snapshot of their growing set up. There’s way more on offer now they’ve opened. And it’s marvellous.

Now before the Mortal Kombat II tournament I had previously that morning loaded up my Mortal Kombat Arcade Collection on my Xbox 360 in the hopes of scratching up my rusty skills, turns out that went out the window as I noticed the fighting would be done on a Sega MegaDrive where the button layout and options are different. Luckily they allowed us to get in some practice in before delving into the main event, so I took charge, jumped in and honed my Raiden skills enough to feel ready to fight.

We had 6 people involved in the MK II tourney which we would follow  a progression tree at best of 3 rounds per match. The winner would take home a $50 JB Hifi gift card. Yummy! Every fight was a challenge as we were all relatively rusty but keen challengers. It was great fun. I managed to work my way through to the finals and like an epic dramatic movie, it turns out I had to face my twin brother in the final battle. It was a very close fight between my Raiden and his trust Kung Lao. However, fortune did not strike in my favour this time and my brother delivered the winning teleport kick to the face. Victory was his. Maybe I should have had another Caramel Latte or cookie, alas it was too late. In any case the win still went home with the family, so that’s a plus.

The defenders of Earth realm, battling for your freedom, standing triumphant.

Even after we done taking celebratory photos and giving “hoorahs” we still stuck around and test out other experiences on offer. I finally got to play an authentic round of Superman 64. I now understand the hate and massive WTF surrounding this game. I had to stop after 5 rounds of “LEX WINS” because I failed to fly through enough hoops. I moved back to the Sega MegaDrive as I needed to play Sonic 2 in its original form. There’s just nothing like it, I’ve played it many times since over the years on ports, ROMs, iOS but seriously they all pale in comparison when playing it as it was originally intended. I did that for a solid hour and I loved it. I will be doing that again very soon. After well were around the room playing different things we decided, let’s play Super Smash Bros Melee on Gamecube, 4 players. Oh yes, we did. It was another hour of hilarity and enjoyment well spent. Then got in some quick Mario Kart: Double Dash which was a lot of fun, first time I’ve played that one. It wasn’t too long before our tummies were grumbling as it was 6:30pm by this time and we figured that’s a solid 3 hours of gaming had by all and called it a day.

I had such a great time that afternoon, probably one of the best I’ve had for quite sometime. I recommend anyone in the Rockhampton/Yeppoon area to come and check this place out. If you appreciate the 80’s/90’s nostalgia or if you are young enough to have not experienced it you now have a place where you can check it all out for real. You can bring your friends down and have lunch, morning tea, afternoon tea and just chill out in a nice environment. The guys, Desmond and Craig are great nice fellas and are more than welcome to set everything up for you, talk gaming, open to ideas with holding an event or function there, just ask them about it and they’re more than open to do their best.

For more information on The Gamers Lounge, their services and membership options check out their Facebook page here: https://www.facebook.com/GamersLoungeCafe?fref=ts

Coming up I will be paying them another visit for a video interview with the guys so keep watching for that! Uncategorized
NINJA TURTLE FACES! Why everyone should accept change. 2 thoughts on “The Gamers Lounge – Great Coffee and Biscuits!”