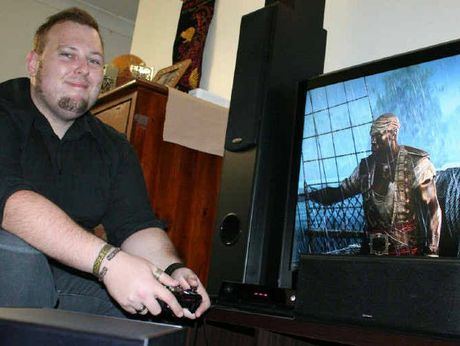 He was the first man in Rockhampton to buy the XBox One at its midnight launch last month, and he’s created his own website where he shares his love of all things comic and games related.

The 28-year-old, who works at Ergon Energy’s helpdesk, said he’s been a fan of all things comic and games related since he can remember.

“I had the previous generation of consoles; I had the Xbox360, the PlayStation 3 and the Nintendo Wii and they were all great,” he said.

“But the big factor for me as to why I chose the Xbox One was I found myself liking all of the exclusive games that came with the Xbox console and it’s a real next generation experience.”

Detailing many amazing technological advances in the latest console, some of the most impressive Christopher said was its voice commands and thermal camera.

“Once you learn all of the voice commands you can tell it to turn off and on or pause a game while playing it, tell it to return to the home page while requesting to play another game and it will do it all for you,” he said.

“Also during a game, you can give voice commands while you’re playing instead of pressing button so it’s awesome.”

The Gears of War (video game) fan, named after his nickname Chunt said when it comes to the ongoing debate for diehard gamers, it’s really more about the games than the console.

“It’s like sport teams, everyone has their favourite but it’s stupid because you’re basically going to go with whatever consoles go with the games that you like,” he said.

Recent reviews have said while the PlayStation 4 has great resolution graphics, texture details and applied effects; the Xbox has more of a holistic approach, adding a new dimension to any entertainment system.

Chunt isn’t out to prove anything to anyone. All he wants to do is share what he loves with the world.

Through the vehicle of his website and social media he hopes he can interact with people out there in the real world whether it be through his YouTube channel or Facebook page or Tweeting up a storm. Chunt loves to upload videos on various forms of his interests to share with you all on ChuntTV.

His favourite Super Heroes are Superman, Green Lantern and Tommy Oliver as the White Ranger.

His favourite gaming characters are Marcus Fenix and Master Chief.

His console of choice is anything Xbox. Uncategorized
End of March Already? WHAT..?